JOURNEY OF BEYBLADE BURST IN 6G

Team Double Elimination: After the match begins, all teams continue to be in the main bracket as long as they keep winning. If any team loses once, they’re sent to the losers (Dungeon) bracket to battle. If a team loses a match in the Dungeon, they’re eliminated from the tournament.

The pressure is on. Keep your winning combos close and bring your "A" game to this all or nothing tournament. 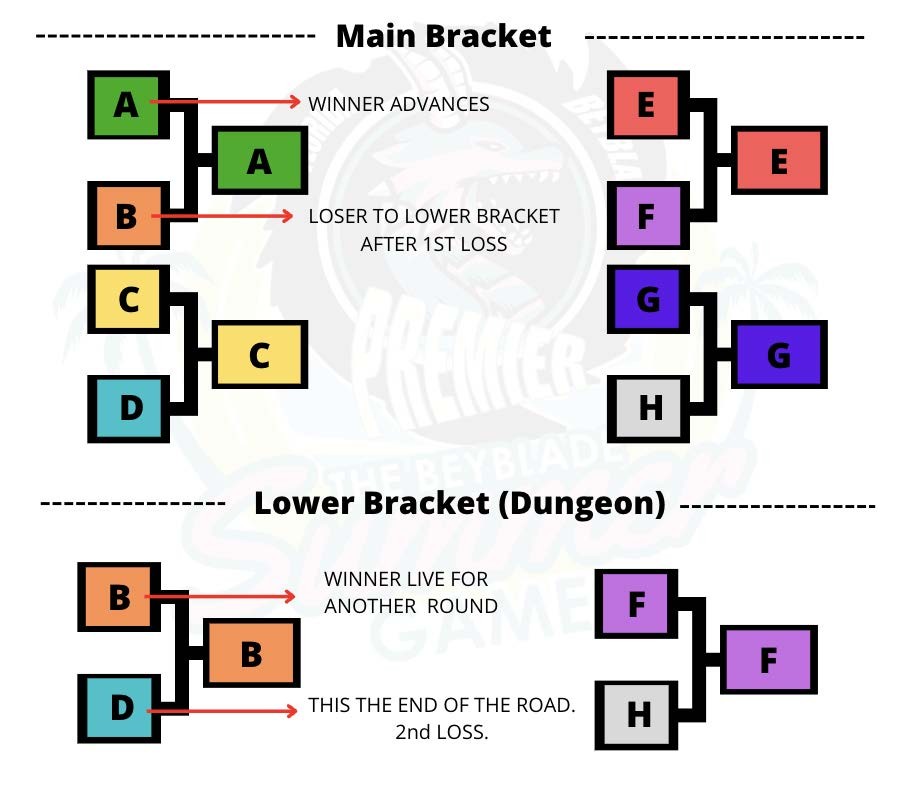 Were you eliminated from Only Legends Survive? The fun is not over yet! After every other round of OLS, we'll create groups with eliminated teams from that round. Groups A, B, and C will perform a 3v3 single-elimination side tournaments. The top 2 teams from each group will advance to the finals for a chance to be the Power Rounds champions. 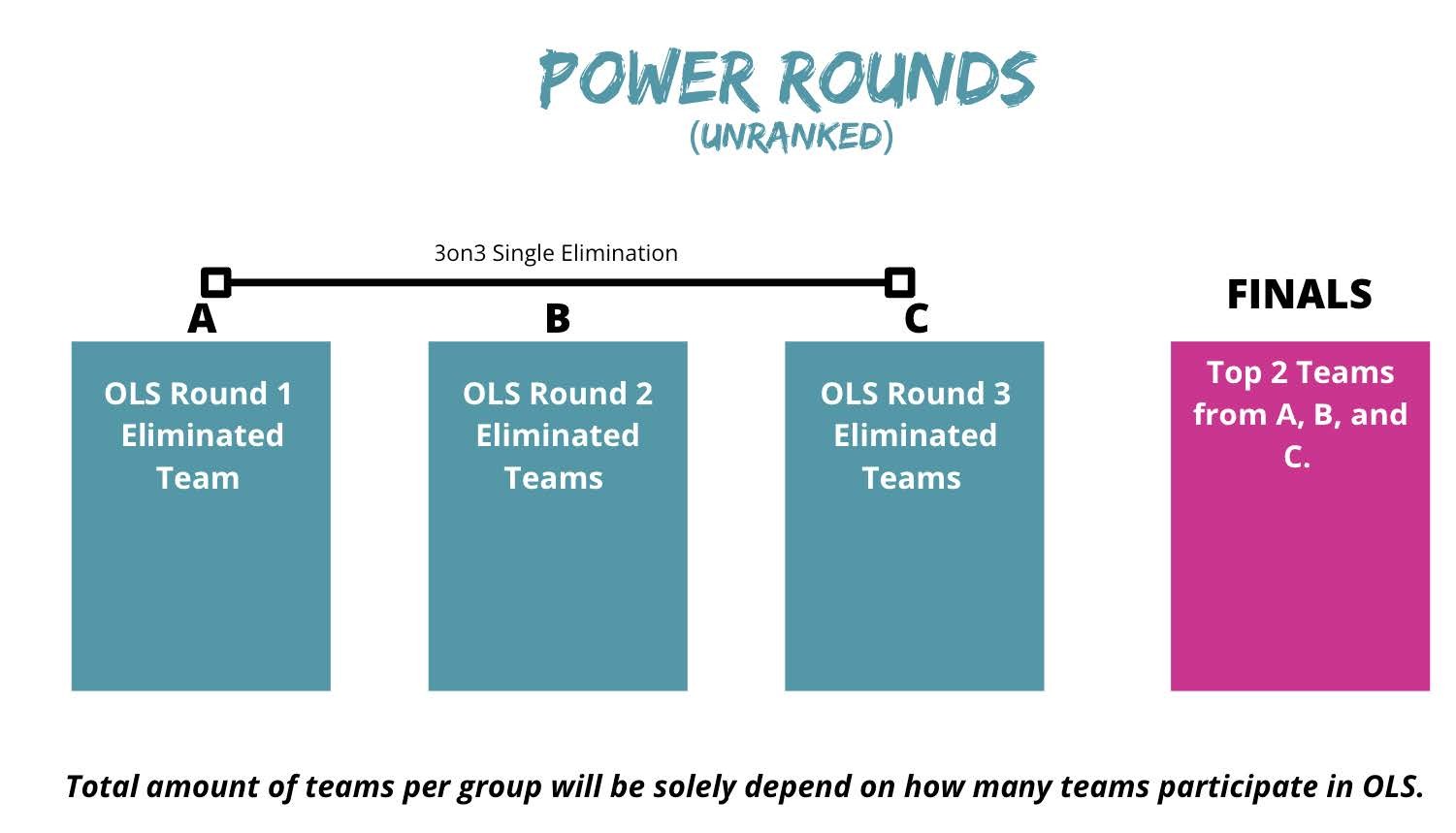 The battles we've always wanted but never had! ONLY ATTACK DRIVERS ALLOWED!

In this mini tournament each team will bring a unique deck of 3 combos to the match. This is an attack match, so be ready for the fireworks! Players can only choose drivers from the list below. Any other driver will not be allowed to participate. This will be an extremely FUN to watch event.

Format: Modified 3v3 – Each team will share a unique deck with no repeating parts. Each team will organize their deck sequence and team member’s order.

Each team member will go for one match, one point.

After each single match, we move to the next combo/player. It is like a 3v3 match but switching players after every point. At the end of the 3rd combo, the deck is reshuffled together with team’s order.

Allowed Drivers (any form such as Dash, Metal Lock, Metal, High and/or

There are no restrictions for layers, chips, disk, weights, or any other part of the combo. Players are welcome to mix systems.

PLEASE NOTE: This event is designed for advanced players. Attack drivers take time to master and are not suitable for every player.

1. Each team will create and share 3 unique combos with no repeating parts before the battle (1 Deck Per Team – 1 combo for each team member).

2. Next, each team member secretly chooses which combo they’ll use for the battle.

3. Combos are revealed before the match starts, but not the player it belongs to.

4. The match begins with each team simultaneously revealing their first player + combo.

When a player wins a match, that player is out for the remainder of the match and their winning combo cannot be used anymore. The winning player has

conquered! The losing player stays in the match and pick the next combo they want to battle against from the winning team’s remaining combos and players.

The winning team of the entire battle is the first team to have each player on their team get a win against an opposing player. This means that the winning team will have all their players “conquered.”

Each team must have unique combos with no repeating parts between all 3 combos. Only one version of a driver per team. For example, if a team member is using Xtreme’, other versions such as Xtreme or Metal Xtreme are not allowed.

• Burst counts as 2 points. KOs and Spin-finishes count as 1 point.

• Each team chooses only their first player. The rest of the order will be chosen by opposing team players for each match.

• Combos are revealed at the beginning of the match. But the “owner” of the combo remains unknown until the combo is chosen by a player form the opposing team. 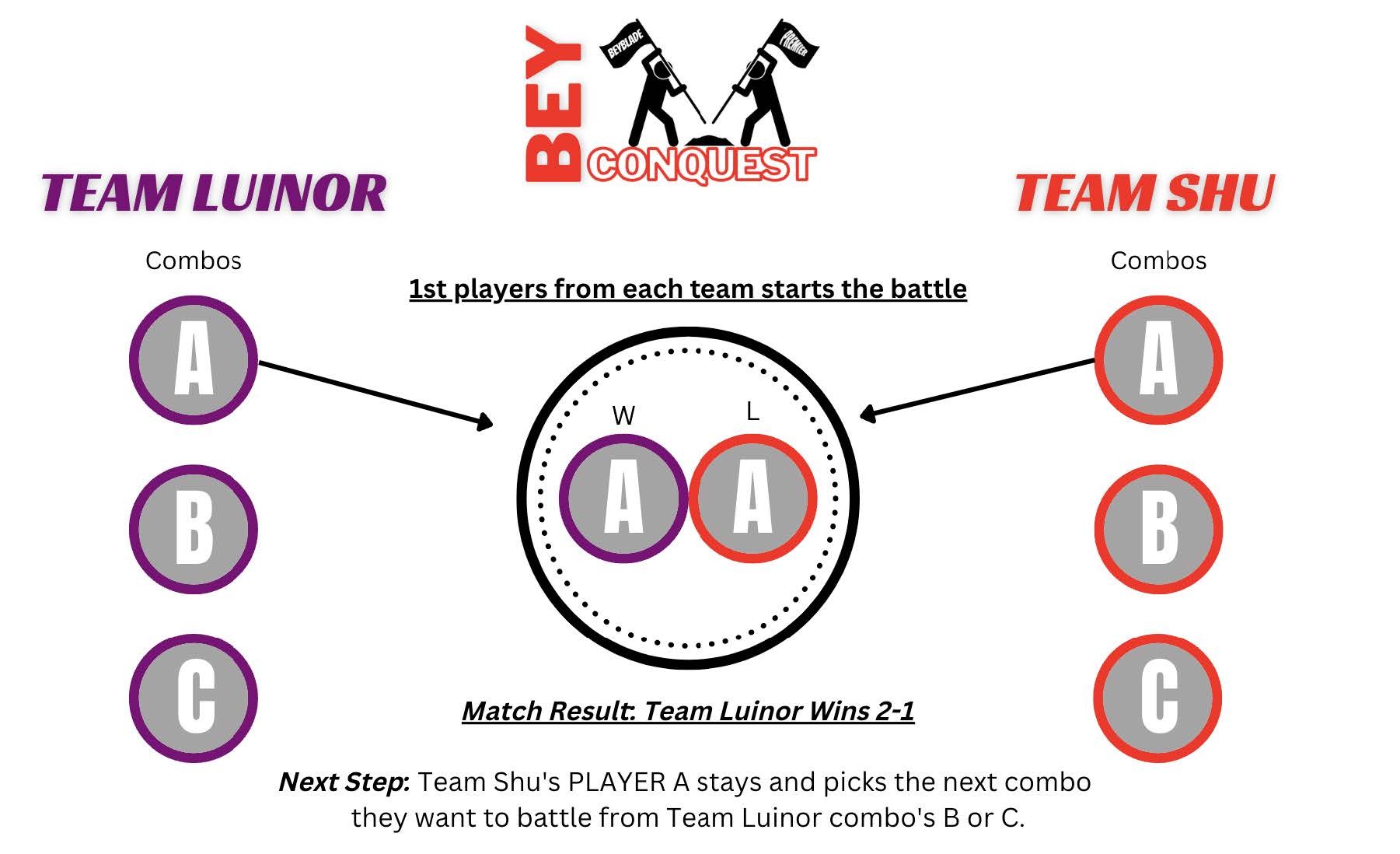 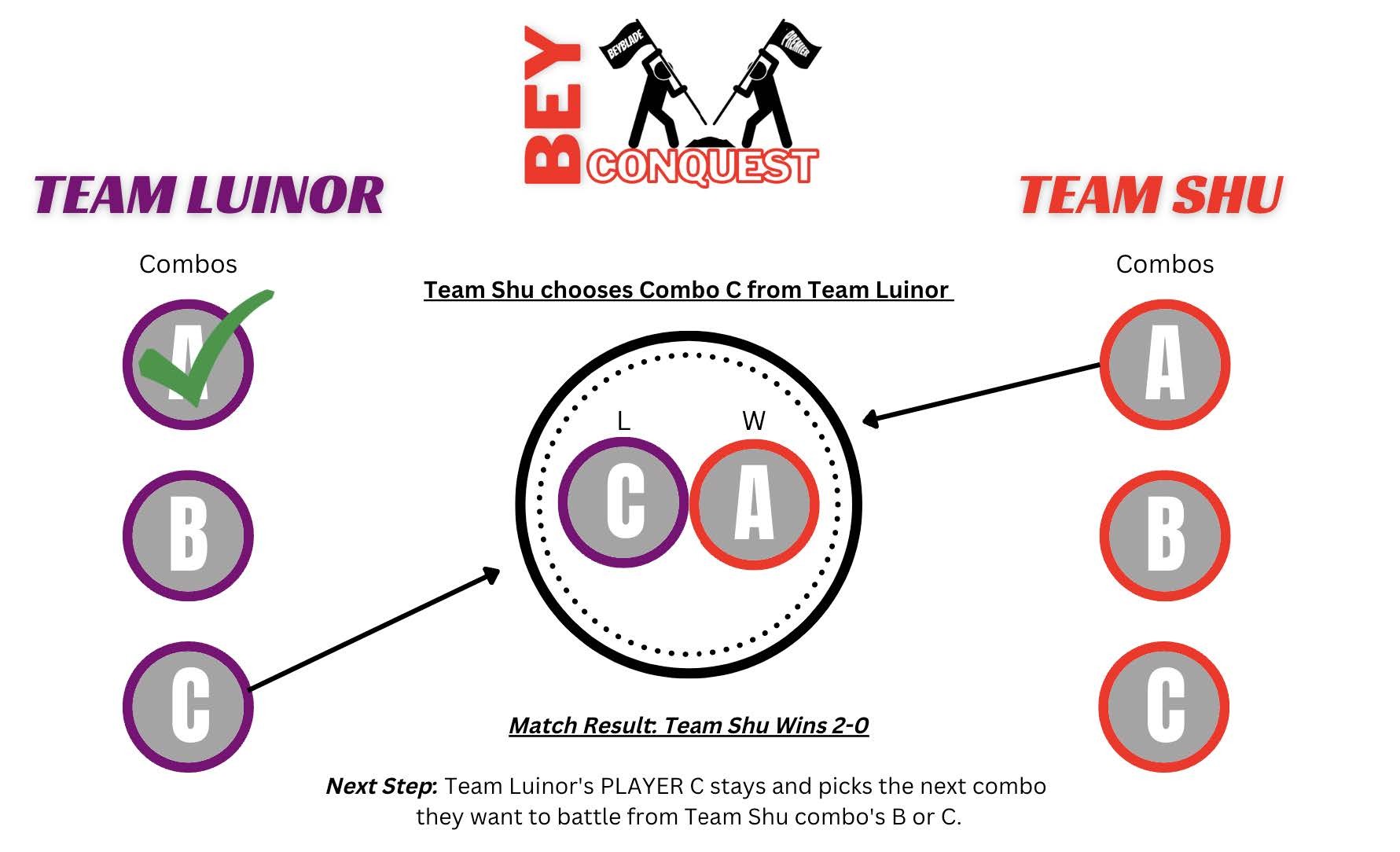 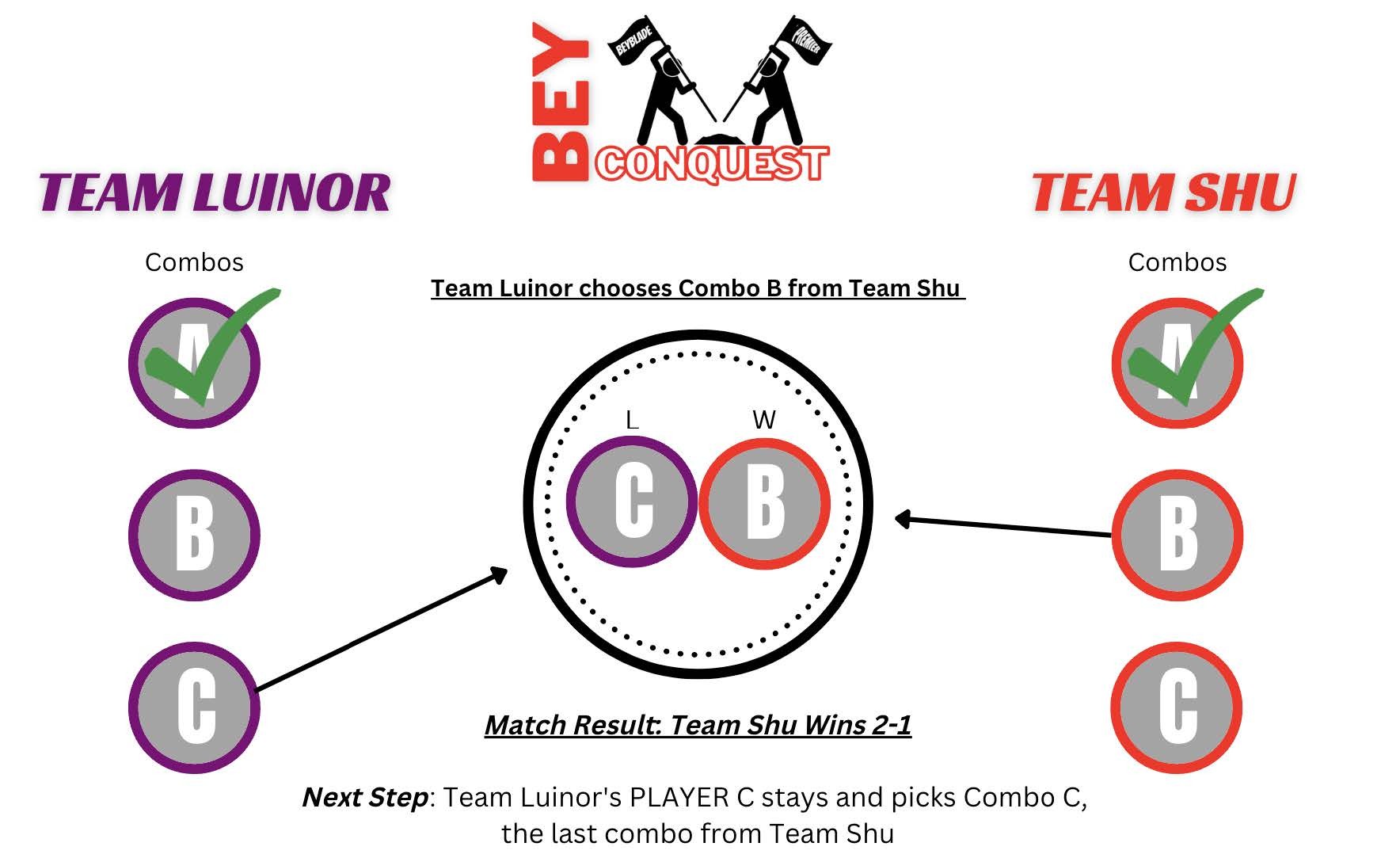 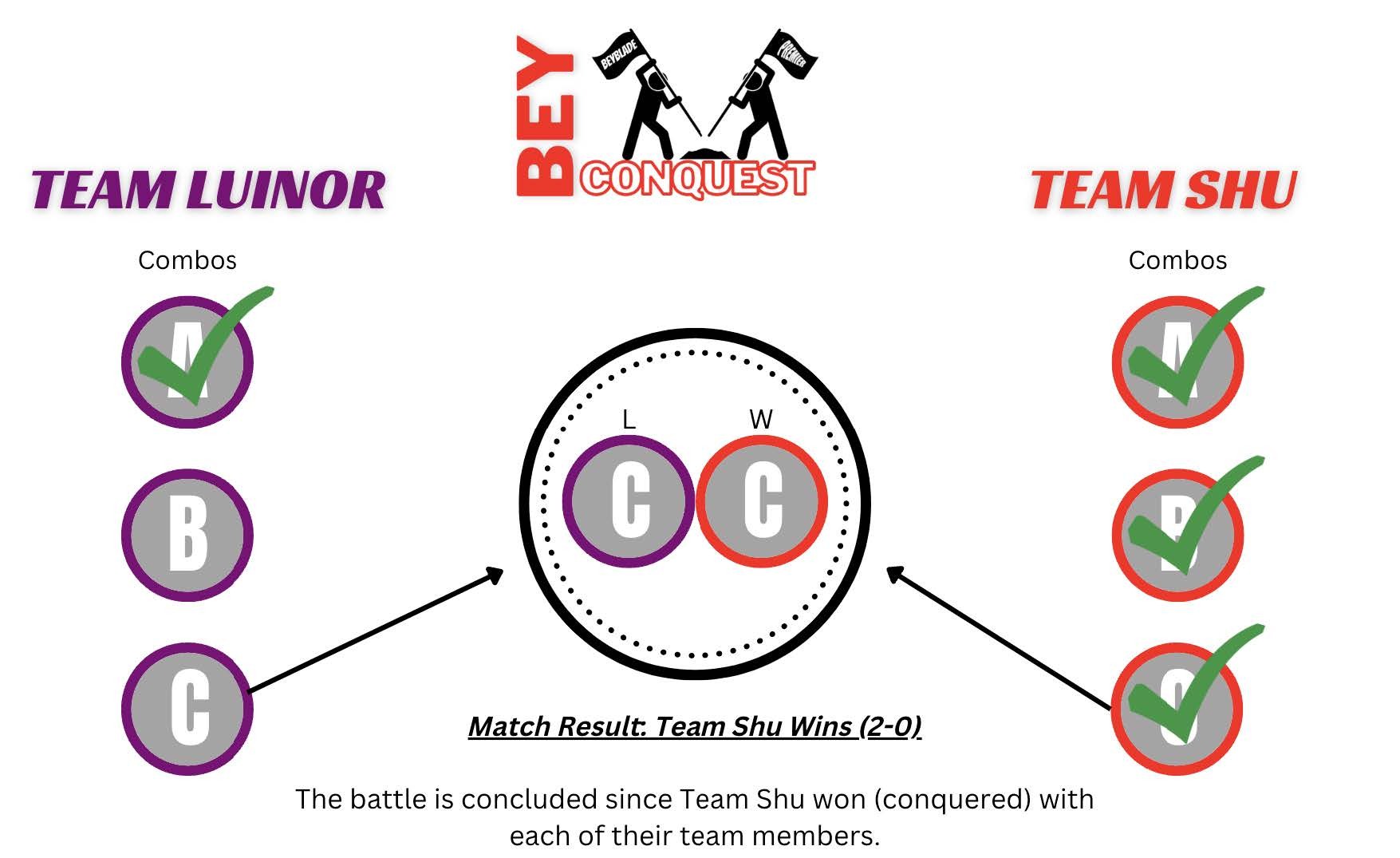 JOURNEY OF BEYBLADE BURST IN 6G

How to win: The first team to accumulate 7 points. Each match is best of 1.

Format: This is basically a 5G but with 6 beys. We will adopt most of the same rules about 5G such as no repeating parts and organizing the combos in order, but

we will add some spiciness to it.

Each team will create a deck of 6 unique Burst combos across different Beyblade Burst systems. Each deck, AT ALL TIMES must have at least 4 different Burst Systems LAYERS (not full combos) (see rules for more).

Battle: Each team will decide their order to battle and organize their combos in order from 1 to 6. Once the order is set, the first player from each team face each other. It continues until all 3 players face each other in the first round. Each player battles back-to-back with 2 different combos in the deck following the deck order.

Scope: The deck size and number of players from each team will continue to decrease after each round

Players Order per Round:

• Round 2: One player will go twice and the other 2 will go once following the deck’s order. The team can decide on the spot the player’s order as the battle progress.

• Round 3: One player will sit out and the other 2 will use the remaining

Strategy: The strategy comes down to player’s experience managing different Burst system across a 6G deck. The team must be able to match bladers with the right combos and more importantly handling battle disadvantages on the spot.

• Each deck must have at least 4 different Burst Systems LAYERS at ALL times. This means that there should always be 4 layers from 4 different systems. This include but not limited to, God Layer System, SwitchStrike System, Cho-Z Layer System, SlingShock System, Gatinko Layer System, HyperSphere System, Superking Layer System, SpeedStorm System, and Dynamite Battle Layer System. All other parts such as disk, drivers, etc. can be combined between systems.

• Each combo must be unique with no repeating parts.

• Only one driver type per deck. If Xtreme’ is being used, other such as MX or X are now allowed in the same deck.

• The initial deck cannot be changed or modified once the challenge begins. After each round, the deck decreases. Each team must pick from their available deck the combos they want to keep for the next round. Keeping in mind that each deck must have at least 4 different Burst Systems layers at all times. After the 1st round, the deck goes from 6 to 4 combos. Each team must select their 4 combos FROM the 6 combos they had in the first round.

• If round 4 is needed, each team will keep the original 6G deck, but the player’s order and combos can be reshuffled. It does not need to be the same order as round 1.

How to win: The team with most accumulated points at the end of 3 matches. Each match is best-of-3

Format: In this challenge we will use the P3C1 format. In P3C1, bladers assemble 3 Beyblade combos to reveal to their opponent prior to the best-of-3 match, and then make their final selection from their 3 presented combos.

As you know by now, we like to make things a little spicy. This challenge will use 3

We will use a bucket with papers in it for players to draw in order to get assigned to each stadium seconds before the challenge. Surprise! Everyone will need to be ready to play in any stadium.

• No repeating parts per stadium assignment. These means the presented deck cannot have repeated parts in their deck.

• Players cannot switch stadium after they have drawn their stadium assignment.

In the event both players choosing opposite spin stamina combos, we will give it a shot with 2 battles. If we cannot clearly determine a winner, we will ask the bladers to pick a new combo from their deck, not including the already selected.

• All teams must present their combos before stadium matches begin. Changes to the combos will not be allowed after judges cleared them.

• In the event of tied at the end of the 3 matches, the captains from each team will face each other in a traditional 3v3 match.

Do you think you can build the longest spinning beyblade combo? This is your chance to combine the best stamina combo with a strong launch and compete against your peers. Everyone will be able to participate! This a thrilling and exciting challenge that will have everybody on the edge of excitement!

• You will get a coupon with your Legends Festival entrance ticket at checkin.

• There will be an assigned area for this challenge for players to come at any time during the event.

• Once you ready, visit the area with your combo and one launcher.

• We will record the total spinning duration of your combo.

• We will announce the longest spinning combo/player at the end of event.

• Participants will only be allowed to bring one (1) full beyblade combo and one (1) launcher.

• Each participant will only have one (1) chance to launch. Missed launches and/or launches straight to the pockets will be automatically disqualified.