The Teampalooza Series is our nationwide fall season tournament that allows bladers to build teams of 3 players to compete for monthly prizes, giveaways, and the chance of winning a FREE weekend for Teampalooza: Legends Festival on Dec 3-4th @ Orlando, FL.

The series is composed of 4 months from August 1st to November 6th. Organizers across the states are encouraged to host 1 tournament a month.

Our Teampalooza: Legends Festival is our new multi-day event dedicated to host the best teams around the community and crown the best of the best.

Match Style: Teams 3on3 (Unique deck for each blader on the team; Team can repeat parts across the teammates)

Here is the proposed schedule: 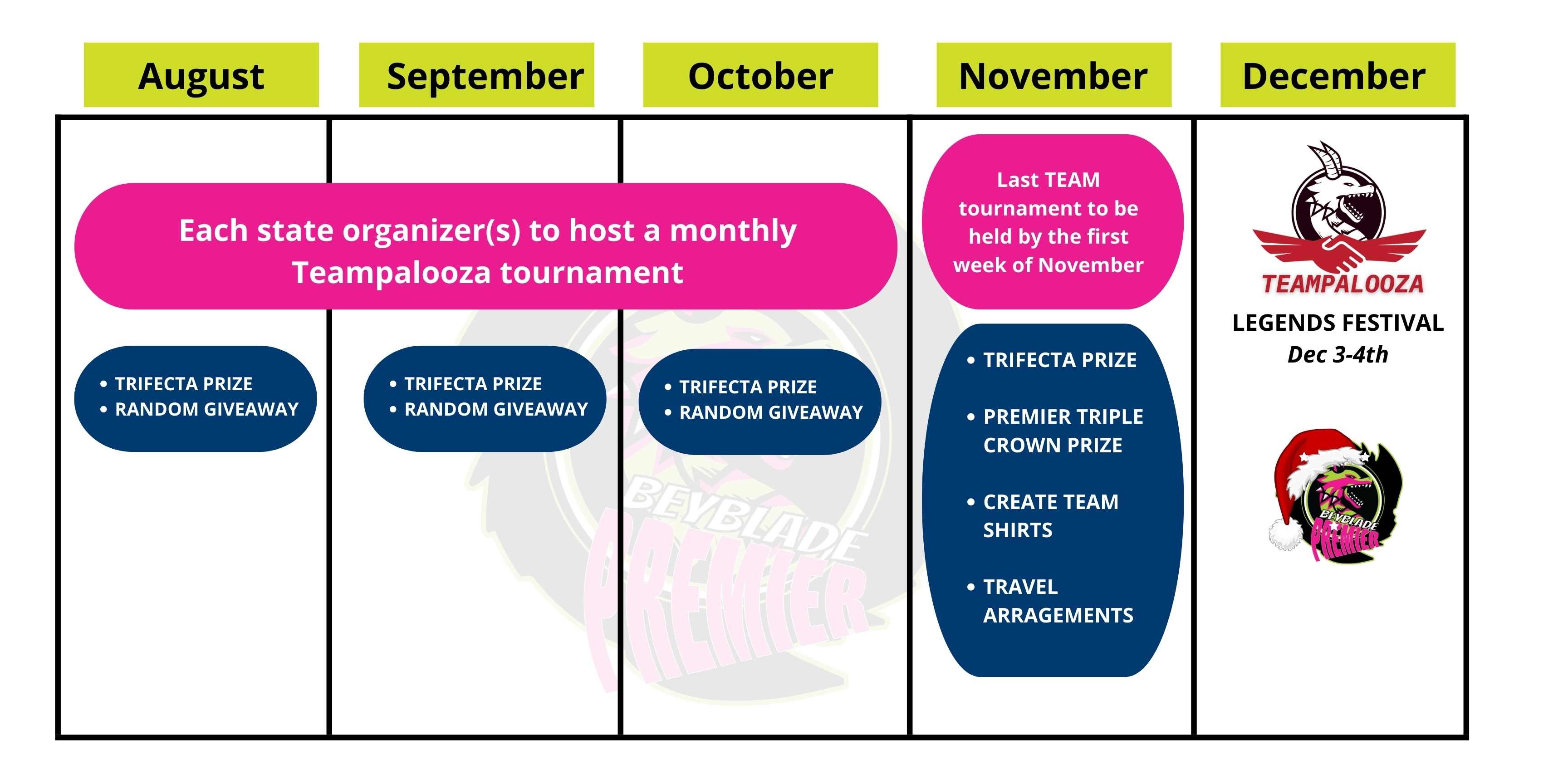 So, what’s all the excitement about?

Well, for the first time we are going to focus on hosting team events to end the year with a BANG! This format is EXTREMELY exciting and well designed by WBO.

We are going to calculate monthly match points and award prizes to teams in a monthly basis. We are also giving away a FREE weekend stay for the team with most points at the end of the series, and more giveaways along the way. You know how we roll, the Premier way.

1. Monthly Trifecta Prize: We are giving away the next upcoming TT release for each team member.

-     The points are only valid if the teams’ tournament is hosted by Teampalooza organizers. Continue reading for organizer selection process.

-     Teampalooza organizers are only encouraged to run 1 tournament a month from August-November.

-     If 2 or more team tournaments are performed within the same month, we will only use the points for the first tournament of the month.

-     In the event of a tie in Total Points Per Month, we will look at the team record to determine a tiebreaker. If it still cannot be determined, we will combine all 3 player’s BR per team and award the prize to the highest one.

We will use the same calculations we use for Total Points Per Month, but in this case, we will accumulate them month-to-month from August to November. The team within all states combined with the most Total Accumulated Points is the winner!

-     The points are only valid if the teams’ tournament is hosted by Teampalooza organizers. Continue reading for organizer selection process.

-     Teampalooza organizers are only encouraged to run 1 tournament a month from August-November.

-     If 2 or more team tournaments are performed within the same month, we will only use the points for the first tournament of the month.

-     In the event of a tie with Total Accumulated Points, we will look at the team record to determine a tiebreaker. If still cannot be determined, we will combine all 3 player’s BR per team and award the prize to the highest one.

3. PremierWay Giveaway Prize: We will run a random giveaway every month for all registered teams. Prizes will be announced every month.

Beyblade Premier will keep track of calculating monthly and total accumulated points, handling prices, and maintaining an updated tracking board with all teams in Premier’s Discord and website.

HOW TO BUILD YOUR TEAMS (RULE’ish)

Please note: Teampalooza Series & Legends Festival are kind of 2 different things. They have their own set of rules. They are “together” but not “together”.

In order for your team to be eligible to win any of prizes listed above, each team of 3 must be registered at BeybladePremier.com/teams before August 30, 2022.

Any team that misses this deadline will not be eligible to win prizes even if they are the highest score at any given month or throughout the entire series.

Registration per team is only $5 for the entire series. Yes, it is a very small amount. We are just looking for the commitment to get teams onboard.

We encourage all players to form their teams and register them as soon as possible in order to start accumulating points from month #1 (August).

Additional benefits for registering your team for the Teampalooza Series:

·     10% discount (+ ALWAYS FREE shipping) at BeybladePremier.com for each team member during the 4 months’ timeframe. A personalized coupon code will be provided to each player after team registration.

·     4 chances to win a new TT release via the Monthly Trifecta Prize.

·     A chance to win a free weekend stay via the Premier Triple Crown Prize.

In order to keep everything running smoothly and avoid last minute changes, here are the guidelines on building teams:

1. First and foremost, there is no restrictions on BRs. Feel free to build your dream team!

2.  Make sure your team members can attend the Teampalooza tournament series in your local state from August to November.

3.  Each team must have team members from their state or proximate state. We understand some areas does not have much action and they consolidate in a certain location such as MD. This is allowed. What’s not allowed is a player from FL and a player NY. We will evaluate this in a team-by-team basis if it needs to be addressed.

4.  Each team has until August 30th to make changes to their team members (if needed). After August 30th, all registered teams are considered final, and any team member changes will automatically disqualify the team from earning upcoming prizes in their local area.

Important Footnote: Any players can form a team of 3 and participate at any tournament during the Teampalooza Series EVEN after August 30th.

It is the expectation that we will get new teams every month from players who just shows up to play that month and need a team to participate.

The deadline is only for teams who wants to be part of the Series, be eligible to receive prizes, and potentially participate in Teampalooza: Legends Festival in December.

It is clear and obvious that not all teams participating in their local areas/states during the 4-month Series will attend the Legends Festival tournament.

Therefore, there is no requirement that the same team who participated in the Series needs to stay the same in order to participate in Legends Festival. Players are welcome to re-build their teams with new players who will be attending the event. This is specifically helpful for other states outside of FL who might only be able to bring 3-6 players which might have played in different teams throughout the Series.

Now, we still want to encourage the teams to stay the same. We believe in the synergy and nurturing process that they will create during the Series.

So, for all registered teams by August 30th that meet all Teampalooza Series Rules and played together for at least 3 of the 4 qualified tournaments from August to November that decide to attend the Legend Festival as a team, Beyblade Premier will:

1.  Waived all Legends Festival fees including, but not limited to entrance fees and additional side tournaments registration during the multi-day event. This includes a +1 for each player.

2.  Design and manufacture their own custom team shirts.

BENEFITS FOR ORGANIZERS TO HOST THE TEAMPALOOZA SERIES:

Local state organizers are the bread and butter. They are who makes this a successful experience for the community. Therefore, Premier wants to provide a little something for the efforts they are putting in. Points 1 to 3 below are stackable.

·     Host two (2) tournaments from August to November under Teampalooza Series and get a free B-33 Stadium.

·     Host three (3) tournaments from August to November under Teampalooza Series and get an extra October’s Takara Tomy release (if RB, only one piece – not full set).

·     Host four (4) tournaments from August to November under Teampalooza and get an extra Premier Stadium Base.

·     Beyblade Premier to provide all winning prizes each month for 1st and 2nd place during the Series.

·     Extra: The organizer with the most teams hosted throughout the entire Series will win 3 new TT releases. Organizer’s preferences on which 3 releases to pick. In other words, the bigger the tournaments each month = the more teams you will host.

Please note: These rewards above are only provided to one organizer per region/state. If 2 or more organizers within the region/area are interested in hosting or co-hosting, they will be responsible for splitting rewards accordingly.

Not allowed: For organizer rewards purposes, having 4 organizers in an area hosting 1 tournament each is not allowed.

HOW TO GET APPOINTED AS A TEAMPALOOZA ORGANIZER IN YOUR AREA/STATE:

Requirements (both need to be met):

·     You must have been active in the past 6 months by either attending or organizing a WBO event.

·     You must have been an organizer for at least 6 months and have a minimum of 3 hosted tournaments with WBO.

1.  Comment a “🌶” with the area/state you want to cover in the comments section below (This is in WBO thread).

2.  Enter estimated dates (day and month) you will be able to host from August to November.

3.  We will begin confirming organizers per state as we move along. Deadline to confirm your interest is July 30th.

If we get 1 or more organizers interested in hosting the Teampalooza Series, we will follow the process below to pick 1 or 2 organizers per state/area.

1.  If 1 organizer can host all 4 tournaments. No need to look further.

2.  If 1 or more organizers can only host a minimum of 2 tournaments per organizer during the 4 months span, we will be ok with the organizers coordinating among each other splitting hosting.

a.   If 2 organizers decide to join forces to host all 4 tournaments in an area/state, the prizes mentioned above under benefits for organizers will be send to one organizer unless notified by the organizers to send to someone else. In other words, you guys are responsible to splitting the prizes.

1.  Communication: This is massive. We will create a Discord channel within the Premier Discord to maintain communication between organizers and develop ideas to maintain each local community engage throughout.

2.  Run Tournaments: It is very important that the selected organizer make tournaments in a monthly basis in order to keep everyone running at the same time.

3.  Submit Timely Spreadsheets: In order to maintain team ranking, points, overall pulse of the tournaments, we will need each organizer to submit tournament spreadsheets quickly so we can run the numbers. We will suggest tagging us in your tournament page once you provide the link to the spreadsheet.

4.  Submit Individual Matches Scores: In order to provide some of the prizes below, we will need each organizer to provide all individual matches scores according to WBO team spreadsheet format. This way we can calculated points. This is not an extra step, just a reminder. If you have questions, refer to the team’s format guide. 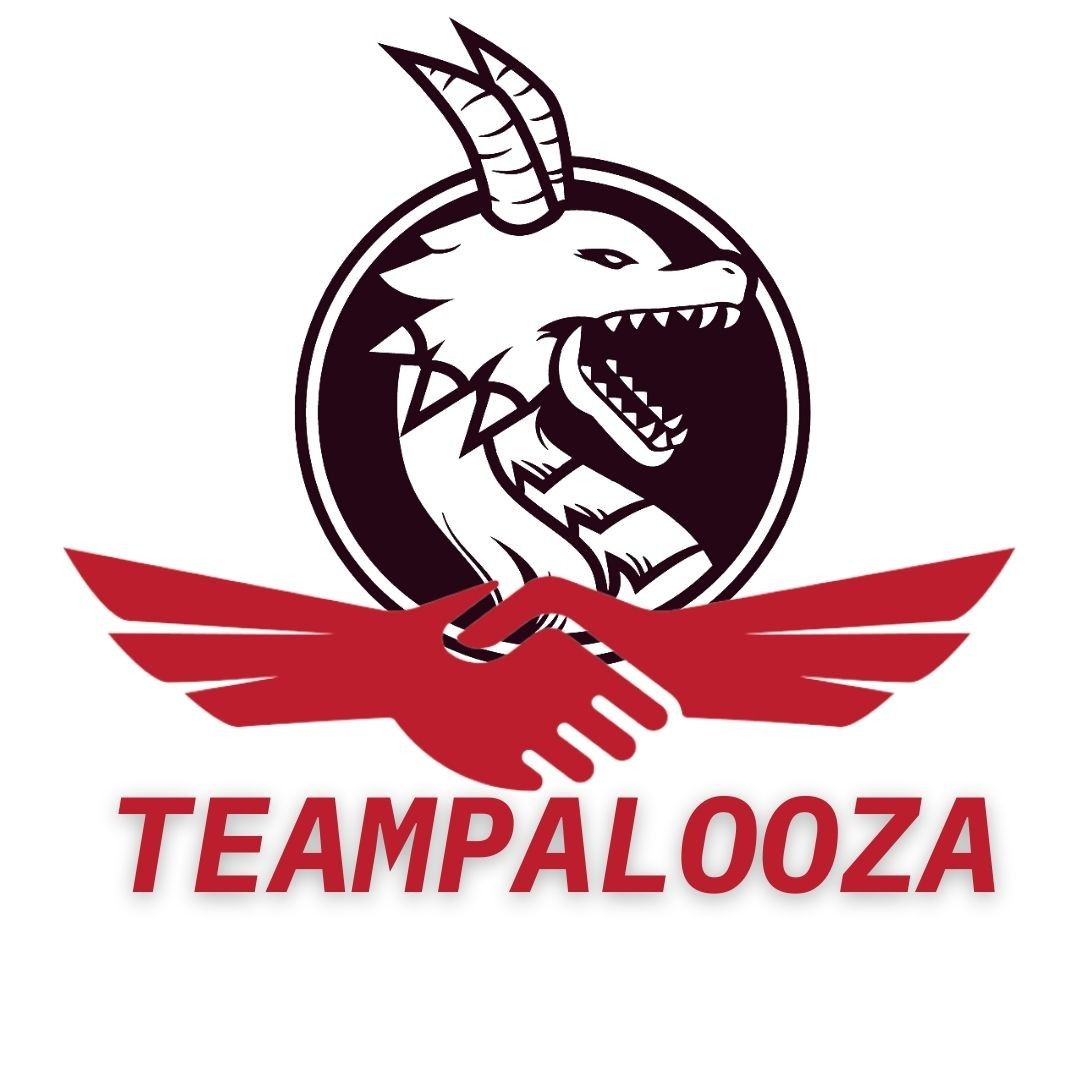 For all general inquiries, please contact us using the chat bubble in this page.